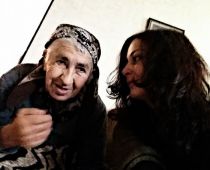 Belgin Cengiz from Istanbul, was supported with the Turkey-Armenia Travel Grant to visit Yerevan, to work on her documentary film about the Orphans and Orphanages of 1915.

“The weak relations between Armenia and Turkey are a huge loss for both countries. Because being from Armenia means, being from Van, Diyarbakır, Dersim, Istanbul, Yozgat, Tokat… The border between us and Armenians, who were one of the earliest communities of this geography and who contributed to the cultural background of Turkey, is similar to separating two siblings from each other by force and violence.”

“The family that I stayed with was hosting someone from Turkey who is not a Turkish Armenian for the first time. They were very puzzled the very first day. Especially the senior member of the family, who was a 84 year old grandmother, was casting me deep glances. They were very friendly. On the fourth day, we had the chance to have an interview with the grandmother. They loved me and trusted me, and shared the life story of their family with a sister who is not an Armenian.”

“We have shared love and friendship during my 10 days of stay with the family who has its roots in Van. The daughter of the family became one of my closest friends. The day we were travelling to Gerhard Church, she played me a song as an example of Armenian music. We were climbing an altitude more than 2,000 meters. The music was instrumental, no lyrics, performed by duduk only. At one point, I was accompanying the song with Turkish lyrics while she was with Armenian lyrics, she on the driver’s seat, me just next to her. Our eyes were filled with tears, we glanced at each other, we just realized with the song that everything was similar but only our distanced brotherhood was strange. I wish for the opening of borders, forgiveness of memories and meeting of brothers and sisters…”