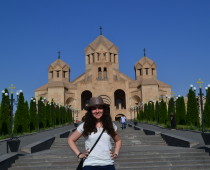 Karin Bal from İstanbul, member of the Armenians of Sivas Society, was supported by the Turkey-Armenia Travel Grant and visited Yerevan to meet the Sivas/Sebastia Society in Armenia as part of their oral history study tour.

“When we gathered last year as the Youth Branch of Armenians of Sivas Society in Istanbul, oral history study was the thing that was on all of our minds and what we wanted to do the most.”

“During my visit in Armenia, which was organized by the Armenians of Sivas Society and with the support of the Turkey-Armenia Travel Grant by Hrant Dink Foundation, I have met with Armenians of Sivas whose great grandfathers and grandfathers have migrated to Armenia. As opposed to my expectations, there were no more people from Sivas living in the Nor Sepastia (New Sivas) region. That’s why I felt a bit disappointed during the first days of my visit. However, after a while I met with Josef Avedisyan who is the President of Fellow Countrymen Association in Armenia. He not only told me about the Sivas Fellow Countrymen Association but also explained me the situation of other Fellow Countrymen Associations in Armenia. In fact when I returned to İstanbul, I have shared the interview I made with Josef Avedisyan in both the Armenian and Turkish pages of Agos newspaper.”

“With the support of Mr.Avedisyan, I have met with Romen Kozmoyan, Krikor Canikyan and Prof.Dr.Levon Çukazyan who are the grandchildren of people from Sivas living in Yerevan. It has been a very different experience for me to meet and talk with them. As being the member of the Youth Branch, I believe that the information I gathered during these talks will contribute to our project in many different ways. Only Krikor Canikyan knew very well Turkish but not the others whom I met with. However most of the things that they reminded in Turkish were the idioms, songs and few words which are mostly used for making jokes or cursing that they mostly heard from their grandfathers. Most of the questions I asked were left unanswered, I could only collect pieces of memories. Me being a graduate of Getronagan highschool and Romen Kozmoyan’s grandfather being a graduate of the same school let to a different bond to occur between me and Romen.”

“The other person I met with took place with the support my colleague in Agos newspaper Maria from Aleppo. Maria’s teacher from Aleppo Ani Fişenkciyan told me that she is living in Yerevan because of the current war and her grandparents are from Sivas. When we met with Ms.Fişenkciyan she was very excited and she has been searching for information about her roots and also from Sivas for years. Ms.Fişenkcyan asked me for help to find her roots in Turkey who share the same surname. When I told this to the elderly in our Association, I learned that Fişenkciyan family has been living in İstanbul with the same surname and have been muslimized but later on they have returned to their identity and became Christians. In the near future, we will bring together Ms.Fişenkciyan and her relatives.”