“Armenia in 1 Hour” on Nor Radio

Astghik Igityan and Sargis Khandanyan hosted a radio program “Armenia in 1 hour” on Nor Radyo every Saturday at 16:00. They wrap up the news of the last week in Armenia and talk about upcoming events in Istanbul and Armenia. Astghik and Sargis talk about politics and culture, social justice and education, compare the realities of Armenia and Turkey. Special guests from Armenia tell about their experiences and projects as part of the program. “Armenia in 1 hour” will continue until the end of the fellowship program with new quests and discussions.

On 5th of February the curatorial department of Istanbul Museum of Modern Art in Turkey organized a guided tour of the museum’s permanent collection led by museum’s curatorial fellow Seda Shekoyan exclusively for the team of Hrant Dink Foundation, staff of Istanbul Modern and for other fellows from Armenia that are in Istanbul thanks to the same fellowship program. Seda highlighted 15 artworks in the collection and made a special tour for more than an hour. 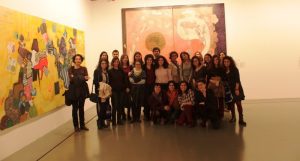 “Past and Future”, the permanent exhibition of Istanbul Modern’s collection, examines Turkey’s art history through works of modern and contemporary art. The chronological flow of the exhibition presents an overview of the evolution of modern and contemporary art in Turkey. The most notable aspect of the exhibition is that it brings together artists from different parts of the world. Most of the works for the collection come from the museum’s own collection or are on loan from the Dr. F. Nejat Eczacıbaşı Foundation. By highlighting 15 works from the collection of Istanbul Modern and discussing concepts such as “delay”, “synchronization” and “translation”, Seda Shekoyan’s speech was focused on critical topics, such as the role of permanent collection of the museum, museum as a discursive apparatus, etc.

Fellows at the Armenian Patriarchate of Istanbul 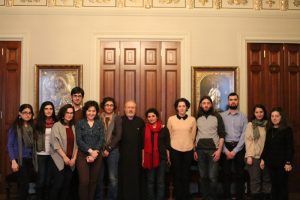 We were promised a visit to Armenian Patriarchate of İstanbul, but meeting the acting Patriarch himself was a nice surprise. Thanks to the coordination of Dikran Altun, Member of Turkey-Armenia Travel Grant Selection Committee, a meeting took place on February 13, 2015 between fellows of the Hrant Dink Foundation and the Armenian Patriarch of Constantinople Aram Ateshyan. Some of the issues discussed, of course apart from the problems of the Armenian community in Turkey and in Istanbul, included the situation of Islamized Armenians in Turkey, Syrian-Armenians and their prospects in Turkey, political atmosphere in Turkey and its effect on the Patriarchate. A guided tour of Patriarchate’s museum took fellows further into the Christian history of Armenians.

As one of the fellows jokingly put it, the process of de-occupation of Istanbul started. On 13th of February fellows gathered at Zeynep Sungur’s place, coordinator of the Turkey-Armenia Fellowship program, to say ‘görüşürüz’ (trans. see you) to Daniel Khachatryan, one of the Foundation’s fellows. Daniel completed his fellowship at Turkish Economic and Social Studies Foundation (TESEV). One of the outcomes of Daniel’s work at the TESEV, was the remarkable publication on the topic of present and future of the relationship between EU and South Caucasus, which is accessible online. 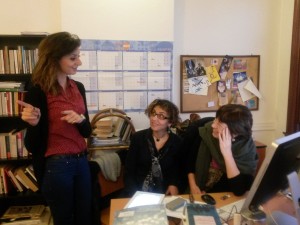 On 18 February, 2 Journalist -fellows Anna Muradyan and Astghik Igityan visited Bianet (Bağımsız İletişim Ağı, Independent Communication Network), which is an independent Turkish press agency based in Istanbul.
In the meeting, the fellows had the chance to chat with with the editor in chief Nadire Mater. Fellows had a productive meeting with Nadire Mater and discussed future cooperation plans.

Sona Mnatsakan says that ‘I think after my fellowship in Istanbul whenever and wherever I cook or eat Ghapama, I will remember Istanbul’. Why? Because only here I started to cook it. When you meet people from different countries and discuss issues such as politics, lifestyles, education systems in each of these countries, it is simply impossible to avoid the sweetest part – the cuisine. There are many dishes with little differences in Armenian and Turkish cuisine, so when you want to show a different world of tastes, the good choice is Ghapama! The cooking of Ghapama is not difficult, it just takes a long time to cook. 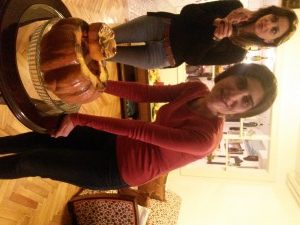 You can find the recipe on internet (I did so myself, because in Armenia mainly my mother and grandmother cooked it and I never knew the details) and then you should head to grocery store or if you are in Turkey – to Bazar. Don’t be afraid to improvise: if in the recipe there are just one or two types of nuts, you can always add more types, the same with dried fruits. Also don’t be stingy with honey and butter. By the way in the song devoted to Ghapama only these two ingredients are mentioned, but it doesn’t mean that the others are not important. Yes, as you guessed there is a song about this dish, so you can accompany cooking with the song and believe me, it will be more delicious. This can be proved by those who ate Ghapama on 28th of February to say farewell to one of the fellows – Astghik Igityan and also for meeting the spring.