I have been at the Agos office in Istanbul in 2009 for the first time. The corridors and rooms were fully packed with newspapers, books; people were busy working with their everyday pace. Later on, we met Hrant Dink’s daughter at the beautiful terrace and exchanged some thoughts and words. 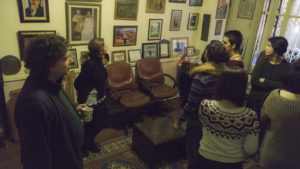 The Agos office, as well as the Sebat apartment where it is situated, is a unique site of conscience for people of Turkey and many other countries, as on 19th January, 2007 thousands came together in front of it to demand justice. That day and the following years became a ‘coming out’ for many hidden minorities in Turkey and it also led to identity crisis among some.

Together with Nayat Karaköse, the coordinator of the Site of Memory project, we stepped into Hrant Dink’s office, and looked at the paintings, personal photos and books that he owned. During the preliminary stage, the Hrant Dink Foundation has been conducting an inclusive process and they value listening the expectations and recommendations of a range of groups from different professions and disciplines. As the rest of the rooms for the time being are mostly empty, we were invited to give our suggestions about how to design and what for to use those rooms. Most of us had been to different sites of conscience and memory in different countries in Europe, Asia and Africa. Different elements from these memory sites have been discussed during the meeting and the brainstorming brought up many interesting ideas and inspirations.All in all, we all have come to a conclusion that what we would like to see in the former Agos office, is, in the first place, the memory and the history of the place.

After an interesting and fruitful discussion with Nayat and exchange of thoughts and experiences about memory sites, we all have agreed that what we (and future visitors) would like to see is not a place of grief and sorrow, but a place, where people can learn the history of the place since its foundation, a place of transformation, a place that gives hope for the future and hope for changes.

I think it is an amazing and at the same time important initiative not to let the place be forgotten, faded and lost throughout years, but transform it into a living, vivid, independently existing space as such. The Agos office can turn into a memory site, but at the same time, in parallel with the Hrant Dink Foundation’s new venue, it can be a place of small workshops, screenings, public talks and presentations.

Nowadays the beautiful Sebat building is covered with a green “veil” because of a construction work, but we hope that in the very near future it will be removed and we will enter Hrant Dink memory site with the hope for the future and remembrance.

The first thing that catches one’s eye sneaking down into the basement of the building of the Armenian Patriarchate of Istanbul is a device immediately reminiscent of the Ark of the Covenant. We were in a religious institution, after all – why couldn’t this be the final resting place of that lost Biblical artefact? After all these centuries, it would have been cool to discover it hiding in plain sight within an Armenian church. It looked the part: a rectangular box with four handles, but it also had a crank on one side, plus a nozzle jutting out, and a rolled-up pipe tucked underneath. 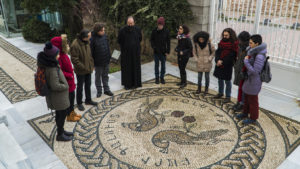 With a smile on his face, the pleasant Deacon Vagharshak Seropian, our guide for the day, explained to us the real purpose of that device – fighting fire. Istanbul was notorious for the fires that plagued its wooden buildings. (It is not for no reason that the Mkhitarian Fathers translated an Italian firefighting manual into Armenian in Venice in 1831, as can be seen in this online exhibition by the Library of Congress in Washington.) Teams of firefighters were always on call to lug around that tulumba, which was essentially a hand-operated pump on four legs. What we saw before us was an original item, decorated with lion and tiger hunting scenes, as well as a panel with an eagle, the name of the artist and his church affiliation duly signed on. A remarkable piece indeed.

The tulumba aside, most of the materials on display at the Patriarchate were unsurprisingly church paraphernalia – vestments, robes, mitres, crosses, chalices, staffs, candlesticks, and so on. These are the leftovers of centuries of Armenian craftsmanship, for the most part what survived from central and western parts of Turkey. Remaining objects from farther east made their way to Etchmiadzin in Armenia, those farther south ended up in the Antelias Catholicosate in Lebanon. Golden, silver, and wooden pieces were displayed in glass cases, sometimes with paintings or more mundane items such as crockery or old furniture decorating the five rooms and corridors.

If you ask me, the most interesting items were the old books and manuscripts. Aren’t they the most attractive of human creations? They are themselves works of art, and they also carry within them rich contents and priceless legacies far more valuable than any ivory binding or gold lettering. There must be so much to be read and discovered at the Armenian Patriarchate of Istanbul.

Our time there was just one morning, however. So we soon found ourselves up in the main building, which received its final form in 1913, with its impressive entrance halls and meeting rooms. As so often in Istanbul, I wondered who else had walked up those very stairs, who else had once upon a time glanced at those five beautiful Aivazovsky pieces on display. Once again, writing caught my eye above all: delightful hand-written firmans and other orders by sultans and patriarchs, replete with seals of clergy and laymen or decorated with colourful geometric patterns.

The experience that we Hrant Dink fellows have in this city include day-to-day errands like grocery shopping, our work placement activities, of course, and gaining an appreciation for what Istanbul means in terms of Armenian life – both past and present. Nowhere is that more evident than in the Armenian Patriarchate.

For more on the Armenian Church in Turkey, visit turkiyeermenileripatrikligi.org (in Armenian and Turkish). 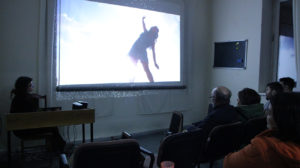 On February 17th I screened some short dance films at my Host Organization – the Institute of Contemporary Art (ICA) in Yerevan. The films were mainly from the SinemaDansAnkara festival which has been hold for already 3 years at Ankara. Through this festival I had a chance to see many dance films from Turkey and abroad. There aren’t many platforms to watch dance films so I decided to make a screening in Yerevan too by sharing some of those films. I conducted a short research and found some dance films from Armenia as well. We watched the films together with many people, then held a discussion. At the end of the screening I told about my project and invited them to participate in the dance rehearsals. Then a woman came up and said that she was a choreographer and wanted to join us. Thanks to the screening, I’ve found a choreographer. Now we are working together!