From the Series of Informal Meetings 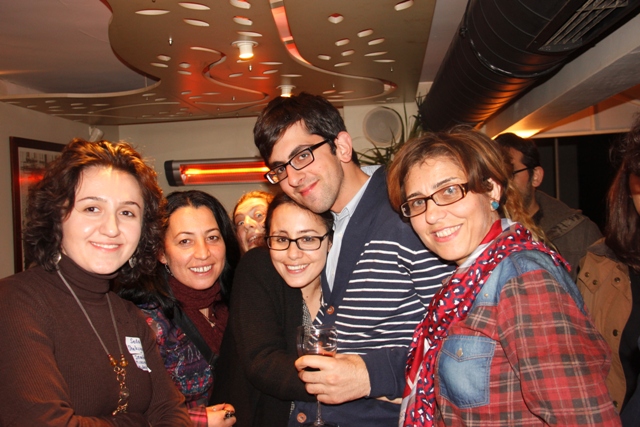 One Monday evening in November stood out from the others (although in Istanbul, hardly any evening or even a day is similar to another). On November 3rd, 2014 Armenian and Turkish fellows of the Hrant Dink Foundation’s Turkey-Armenia fellowship scheme came together at the Kaktus cafe in Istanbul’s Beyoglu, to get acquainted with each other. They also met the representatives of their host organizations in Turkey. The informal meeting, spiced with drinks and lively conversations, will hopefully be a start for new connections and idea exchanges.

Marc Nichanian and the Fellows under One Roof 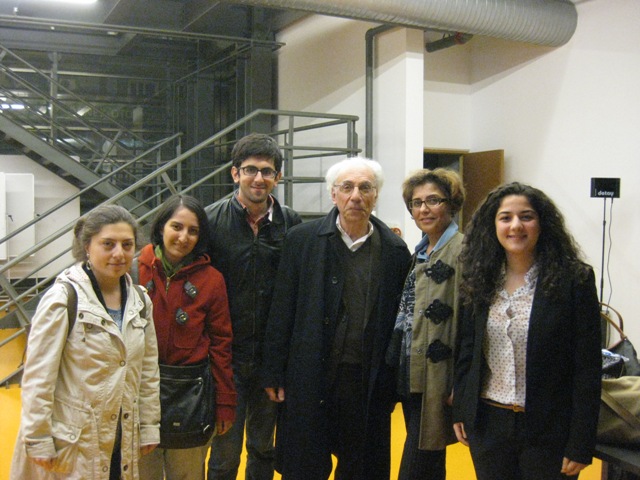 The evening of November 7, 2014 was exploratory. The fellows attended a panel organized by the Istanbul Bilgi University Center for Migration Research. The panel on “Migration and Literature: Reflections of the “Armenian Deportation” on Migration” was a good opportunity for the fellows, as well as academics, journalists, and generally people interested in literature to listen to Marc Nichanian, currently a visiting professor at Sabanci University in Istanbul, and previously a professor of Armenian Studies at Columbia University in New York. The other speakers were Fethiye Cetin, Halil Ibrahim Ozcan, Gulcicek Gunel Tekin, Zulkuf Kisanak. The panel was moderated by Ragip Zarakolu, a well-known Turkish human rights activist and publisher. 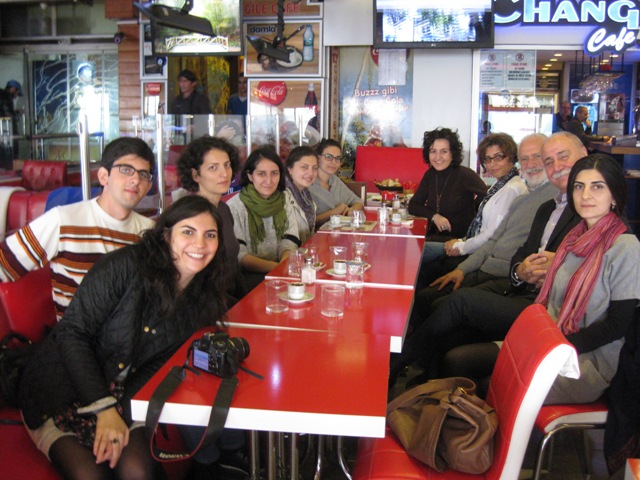 There is a fascinating culture in Istanbul: friends, acquaintances or even business people may go out for breakfast for official or non-official meetings, and not for lunch or dinner as others may do. So in one such morning, on November 15, 2014 the fellows of the Hrant Dink Foundation’s Turkey-Armenia fellowship scheme had a breakfast with Ibrahim Betil and his friend of about 50 years Ahmet Aykaç in the Ortakoy neighbourhood. Apart from getting to know the fellows’ activities and interests, it was a valuable chance for the fellows themselves to get to know what career and life path Ibrahim Betil and Ahmet Aykaç have gone through and get some inspiration from the enthusiasm that flowed from them. 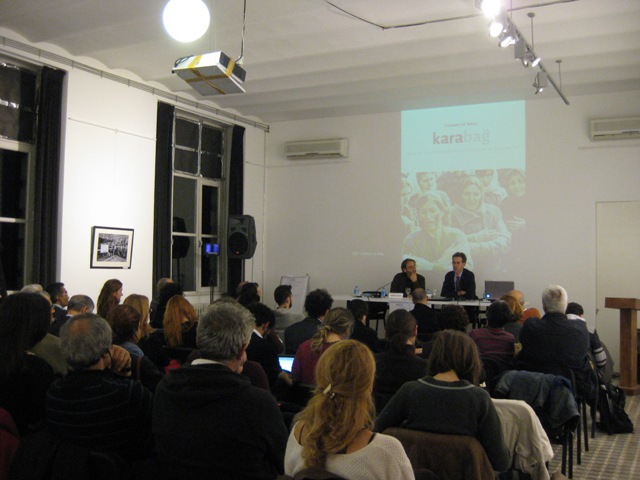 Tuesday Nov. 25 was memorable as the fellows had the chance to attend the presentation of the book “Black Garden” by Thomas de Waal, Senior Associate in the Russia and Eurasia Program at the Carnegie Endowment for International Peace. The book, which is a study of the conflict between Armenia and Azerbaijan with historico-political analysis and interviews carried out throughout the region, was published with the support of the Hrant Dink Foundation. It could serve as a useful source for the fellows as well, especially for those doing their fellowship in policy making and peace research. 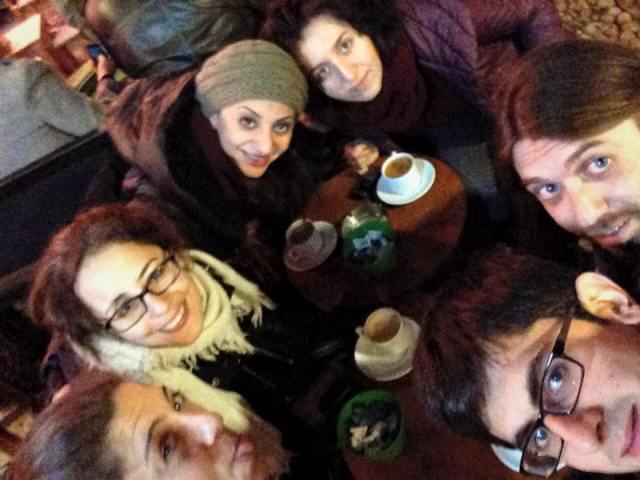 One of the Friday evenings (Nov. 28) was filled with lots of joy as the fellows met and had a nice chat with Burcu Becermen, from the Hrant Dink Foundation. The fellows tried to catch up and tell Burcu about their experiences so far, both at their host organizations, as well as in their daily lives. The evening was filled with chats about fellowships, accomodation, the society, unexpected situations, professional experiences, etc. The idea now is to organize such meetings on a monthly basis.

Fellows have long heard about a school in Istanbul for kids and youth from Armenian families who have travelled to Istanbul to have better employment opportunities. Some of the fellows had also the opportunity to interview the people who run the school, as well as the parents who send their kids to that school. In order to learn a bit more about the school and its needs, the fellows expressed interest in having a meeting with someone who has decided to take steps to find some funding for the school maintenance. Thus, on a Sunday afternoon, the fellows met Shooshan Kechichian, the person who coordinates a fundraising for the Armenian school. The fellows expressed interest in further steps to support the school. To learn more about the fundraising and to support it. 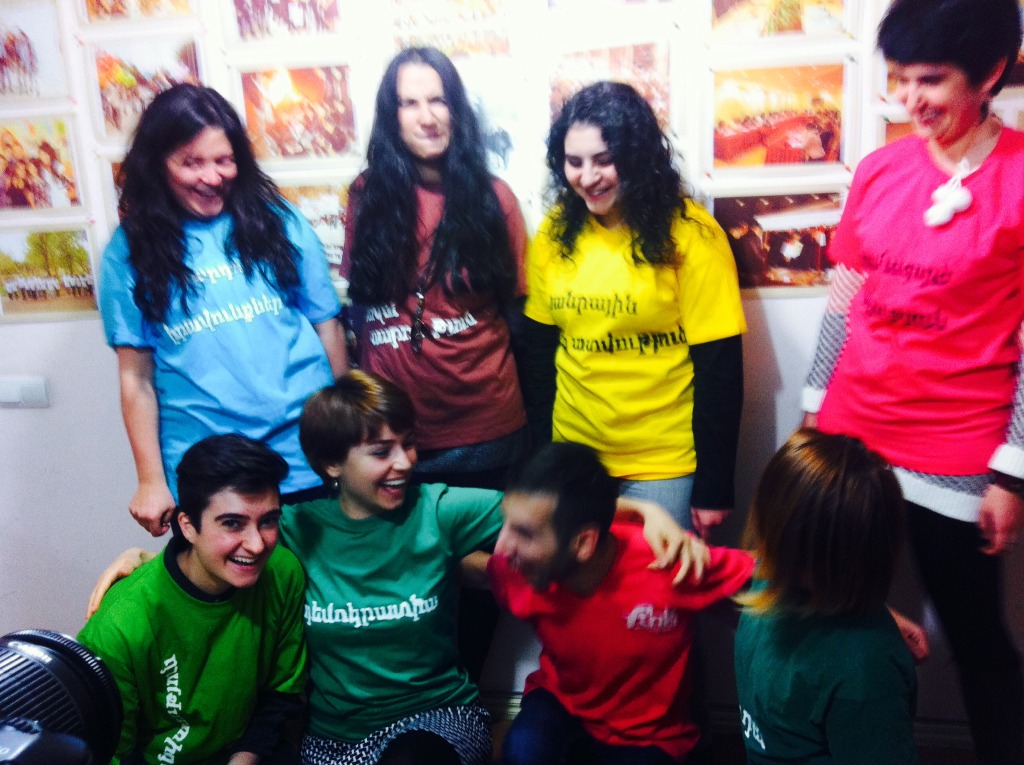 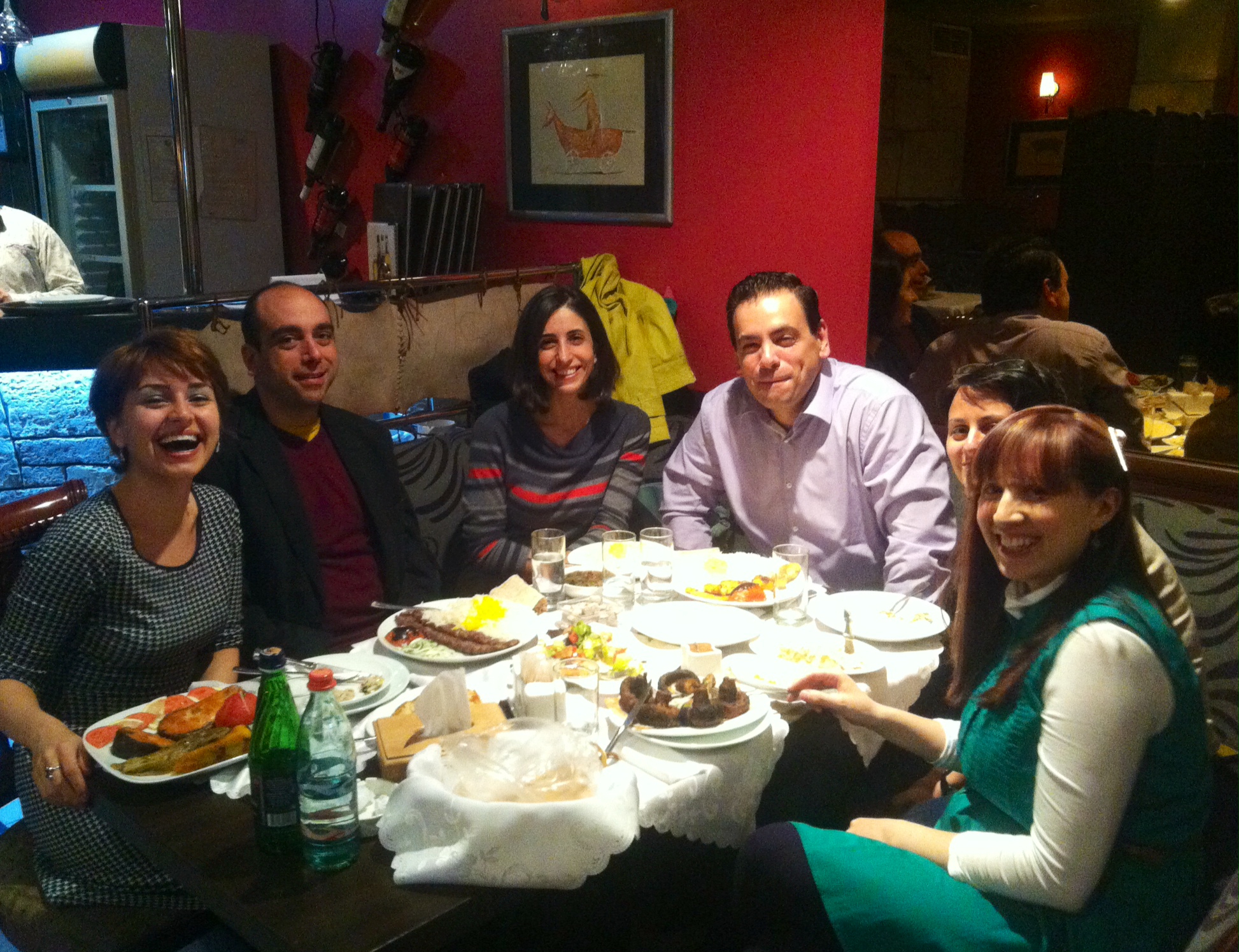 A group of diasporic Armenians and I discussed “Reading Lolita in Tehran” during our book club meeting in an Iranian restaurant called Aryan that’s located in Cascade.

From Nil, For Lusine

Yesterday was the International Day for the Elimination of Violence against Women. On this occasion, the Women’s Resource Center of Armenia together with the Coalition to Stop Violence against Women organized a demonstration on Republic Square in the center of Yerevan and walked to the Parliament. Each member of the parliament was addressed an envelope containing a draft law on domestic violence. Also, they were brought a box containing about 2 000 postcards written by men and women of Armenia demanding from the government a law to protect individuals from domestic violence.

At the square, I was holding a sign showing the photo of an Armenian woman, Lusine: Lusine was killed in 2013, by her husband. He stabbed her with a knife and she died a few hours later at the hospital. Their 15 year-old daughter witnessed the crime. I don’t know Lusine, except for the information written on my sign; as I was holding her memory close to my body. She was blond; she has a soft look on her face; her eyes seem a little frightened on the photo, or simply she looks like the kind who won’t disturb. She is wearing the typical white shirt of a working woman, or maybe even a nurse. There is no smile on her face, although she seems to be trying. I don’t know Lusine, but I wished we didn’t have to carry her face around Yerevan to appeal to the consciousness of people on this terrible fact that in some families, people get to the point of killing each other.

Lusine is certainly a victim of domestic violence. But I think he is a victim too—a victim of a system that buttresses strange rules to accommodate and presides over how relations of marriage should work, over how psychology and individual needs are set aside for the sake of ruling the society. What if they were never meant to marry each other but rather had to? I am sure that as two adolescents, their love was nice then. But what if their lives since then had just been a living hell? No matter how hard I try, I have difficulties to understand what makes a man taking a knife in his hand and plunge it into the body of his wife. And I can’t help but wanting to ask to Lusine: did you see him coming? Did you try to fight back? Was your life together such an horror?

And I want to ask to the society, why did you put Lusine in the position of victim? Why did she have to pay the high price of her own life for a system that pushes people to marry each other?

Is our general conception of forced marriage too much limited to a fantasized others when it actually occurs in every stratum of all societies, in our own houses?

But really, I can’t say; I don’t know Lusine.

Could we imagine that he didn’t love her, he didn’t want to marry her, and maybe she was his worth nightmare created by the needs of this society which demands marital status to prevail over the beautiful adventure of discovering love as young adults…

Lusine’s father was there with us. I didn’t know he was her father until after he had left. But I looked at him; I thought he was carrying dignity and pain on his face. Such a strange pain that flowed from his eyes, gazing at us young women holding portraits of other deceased victims of domestic violence. It must be so hard to position yourself in this struggle. It is so much bigger than what one person can seize on, than each policy or governance we all together put up and vote for. It is bigger than all those because domestic violence is standing right at the meeting point between the rules of society and the infinite world of love; between the practical and the emotional. And we all know that when love works, society is easy. Thus, this struggle is a game of power between society and love. If Lusine’s father had anything to do with her marrying this man, like often elders have to do with the love relationships of their descendants, I’d love for him to think that we are all responsible for Lusine’s death, because we all positively rely on this society more than we rely on our love. Indeed, Lusine’s death wasn’t an accident. It happens every day all over the world–In Armenia, in Turkey… We share that too…

Painting with children in Gyumri 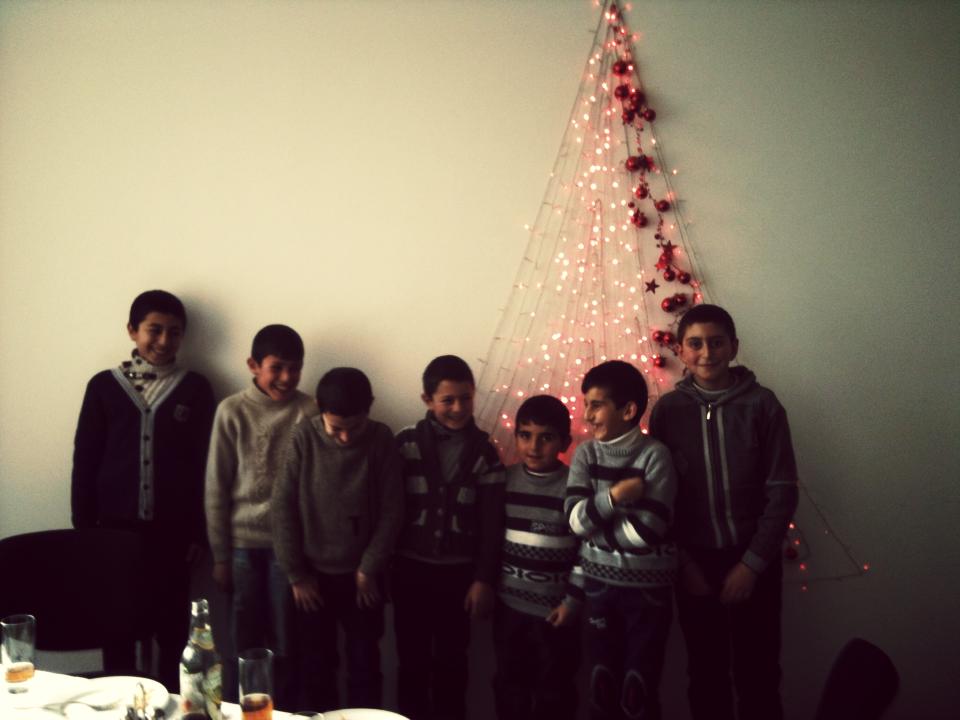 Today we had some children from Gusana in Gallery 25. They were the cutest! I will join our artist Hakob Hovhannisyan and will give them painting and art classes from next Saturday onwards. They were surprised that I came from Turkey but I think we like each other now. 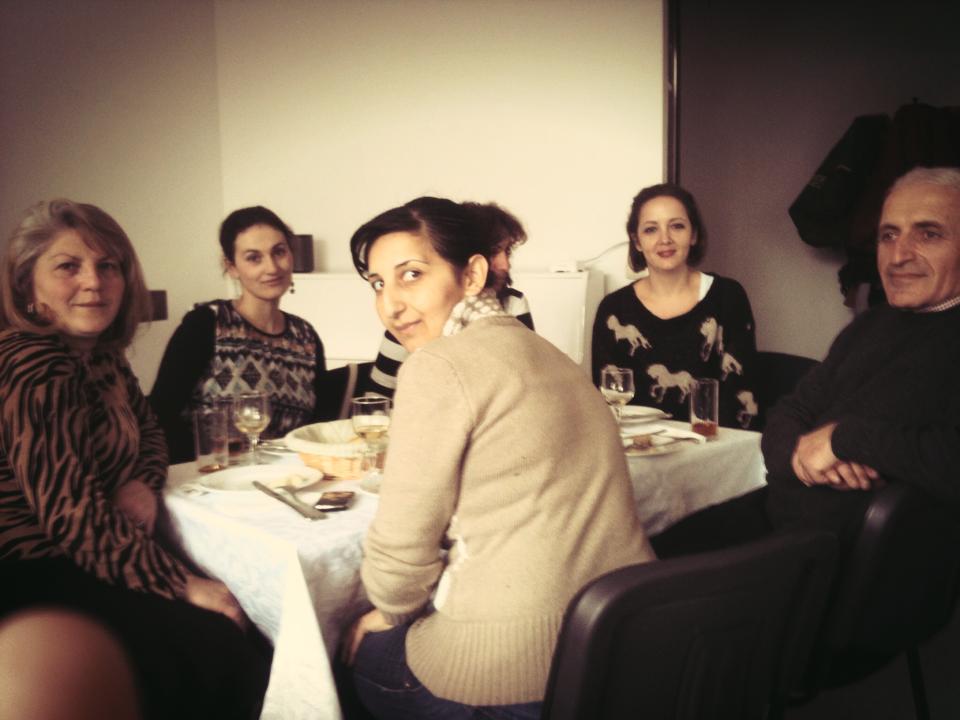 Fellows at the ‘Selaed Gate’ conference

On Nov. 22-23 a two-day conference entitled the “Sealed Gate: Prospects of the Turkey-Armenia Border” brought together academics, practitioners, policy makers and civil society representatives from Armenia, Turkey and abroad. Organized by the Hrant Dink Foundation and hosted at the Faculty of Political Science at Ankara University, the conference aimed to address the implications of the closed borders and their political, economic and social impact on the two societies as well as the relations between Armenia and Turkey.

A group of Armenian fellows also traveled to Ankara to attend the conference. Throughout the conference the fellows had many opportunities to meet the guests and the speakers, and to engage in discussions about the past, present and the future of Armenia-Turkey relations. The conference was also an important opportunity for the establishment of professional connections and networks for the fellows.