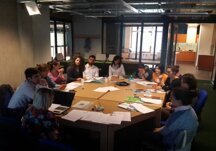 Before their travel to Turkey, the fellows from Armenia participated in a pre-departure orientation organized by the Hrant Dink Foundation representatives in Yerevan, in the conference hall of the Eurasia Partnership Foundation. The fellows had the chance to meet each other and to be better informed on what they expect from their fellowship in Turkey. They were informed about the Support to the Armenia-Turkey Normalisation Process programme and its components. Discussions were made on many logistical issues that interested the fellows.

A similar pre-departure orientation was organized at the Hrant Dink Foundation in Istanbul, for the fellows from Turkey. The fellows had the opportunity to discuss details about the fellowship process in Armenia, as well as possibilities of their contribution to the programs offered by the host organizations and how to establish ties between organizations in Turkey and Armenia. The fellows had a long conversation about Armenia with Dikran Altun (Selection Committee Member of the Turkey-Armenia Travel Grant). 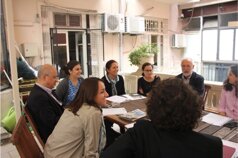 After arriving to Turkey, the fellows from Armenia were invited to the Hrant Dink Foundation for an on-arrival orientation and a meeting with the President of the Hrant Dink Foundation Rakel Dink, Dikran Altun (Selection Committee Member of the Turkey-Armenia Travel Grant) and İbrahim Betil (Selection Committee Member of the Turkey-Armenia Fellowship Scheme).

When people fond of debating get together, something like Young Talks is born. This is a series of seminars, where young researchers, academics, civil society volunteers from Armenia and Turkey come together to present their role in the regulation process of Armenian and Turkish relations.

Sargis Khandanyan, is working towards filling the gap of lack of information between the two neighbors. During his speech at Young Talks he presented the outcomes of projects that he and his colleagues are carrying out at the Civilitas Foundation through CivilNetTV online news channel. Reportages that he and his colleagues make and a few of which he showed during his presentation, serve as alternatives to the mainstream media, as they present people from various cultural, professional, ethnic backgrounds living in two countries and creating new perceptions of known and unknown problems and their solutions, in this way broadening the scope of traditional thinking.

The videos made by Sargis and CivilNet team, some of which in English are available at CivilNetTV’s page.

On October 20th the Armenian fellows of the Beyond Borders program were hosted in the dance studio of Cıplak Ayaklar collective for a performance entitled “Sen Balık Değilsin ki” (“You’re not a fish, after all”). Çıplak Ayaklar Kumpanyası is a project group formed by dancers with different backgrounds and its objective is to give impetus to the growth of modern dance as an artistic branch in Turkey. The performance incorporates elements of performance art, dance, poetry and sound and touches upon a variety of topics around human rights and freedom of expression. The performance was followed by a discussion between the fellows and the members of the collective.