A trip to Garni – by Duru Ors

With the12th and 10th grades of English class we realized a trip to Garni beginning from the Arch of Charents. We read a poem by Yeghishe Charents there. 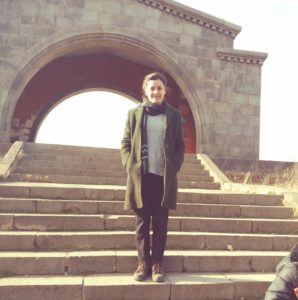 Afterwards we went to Garni. The students told me about the history of Garni. It’s an amazing pagan temple and we talked about the hellenistic influence on Armenian architecture. After Garni we went to Geghard Monastery which impressed me a lot. The monastery is from the 4th century and its location and history is very powerful. Being artificially carved out of a mountain, this medieval monastery is in the Kotayk Region of Armenia, and is located literally at the end of the road. From here you walk up a path which has a few vendors of souvenirs and snacks (we tried the sweet “sujukh”, sweet lavash and gata). We bought gata from the bakers at Geghard, and it had “Geghard” written on it. Then we reached the entrance of the complex which is surrounded by high walls on the three sides and a mountain on the fourth one. We visited the churches which were interconnected.

There is a very thin creek running in one of the chambers carved into the mountain, and the acoustics is great throughout the complex. If you climb up stone stairs located on the left side of the church, you will pass by some very finely carved khatchkars (cross-stones).

It was amazing being in such a beautiful place. Before returning to Yerevan, on the way we had a picnic. I had so much fun with the students and Irene, the English teacher.

An Island in Spite of Itself – by Aykut Öztürk

I currently carry out my fellowship at the Armenian National Academy of Sciences, Institute of Archeology and Ethnography. As part of my fellowship in Armenia, I am in the process of organizing several public seminars and a one-day conference. The first of these events was held on March 23rd at the Institute Library on Charents Street in Yerevan. I presented a paper based on former ethnographic research I conducted in Turkey over a period of 5 years. My paper was entitled “An island in spite of itself: Armenians making community in Istanbul” which made direct reference to Fran Markowitz’s seminal work “A community in spite of itself” published in 1993. 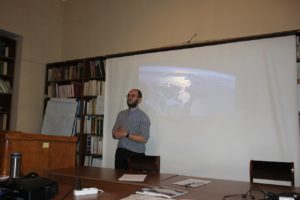 My presentation aimed to discuss how the physical space of Kınalıada, a tiny island off Istanbul with a predominantly Armenian population exclusively in summertime, provided basis for collective affiliation. For this, I first located the island community in relation to the larger Armenian population of Istanbul. However, I also located the islanders in relation to other non-Muslim communities in Turkey — and the island in relation to other islands in Istanbul (and elsewhere). A good deal of my presentation focused on unpacking terms such as “yerli” (lit. local/native) and “yabancı” (lit. foreigner) in the context of Turkey in general and the island in specific, as their everyday definitions reflected the stigmatization of non-Muslims and the wider politics of belonging in the country. This is how my presentation necessarily touched upon the nation-building process in Turkey and its impact on place-specific collective affiliations as in the context of the island.

I have been really happy that there were almost no seats left unoccupied at the seminar and the audience was very engaged with my material. Although I initially planned to go on for an hour or so, we easily made it over two hours – quite unusual for an event like this. I am truly indebted to my colleagues at the Institute for helping me in setting up the event and the audience for their often challenging questions. The next of these seminars is scheduled for the first week of May 2018.