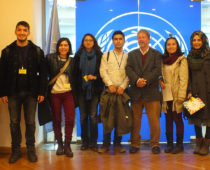 “I think we came to an end of the era where everyone stand up for its own right. We tried it and it failed miserably. Now, it is time to be there for someone else. We could not be there for Anatolian Armenians but we were in Yerevan for Syrian Armenians. This does not change the past any better but I am full of hope for the future.”

“Do not give up the idea of common future when there is an opportunity to sing together.”

“We are all brother and sisters in this geography. If we want to see better days in the future, we should think and act beyond borders.”

“In the beginning, I hesitated to visit Armenia because I was not sure about the possible attitudes that may be hold toward us. But, at the end of our visit, I realized that my hesitation was unneeded because what made me hesitated was unknown and this could only be overcome by knowing the unknown.”

“Turks and Armenians are two plane trees which had grow in the same soils and they have continued to live through leaning themselves. Borders cannot separate us.”