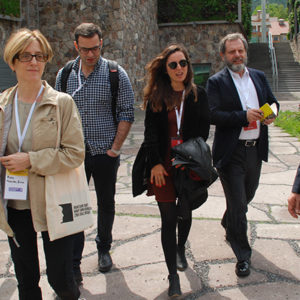 A group of 7 journalists from Turkey visited Armenia from May 25th to 29th, 2017 as part of the Turkey-Armenia Journalists’ Dialogue Programme, organised by the Hrant Dink Foundation in partnership with Gyumri Youth Initiative Centre with the support of the UK Government’s Conflict, Security and Stability Fund.

In the 9th year of the programme, which aims at strengthening ties between journalists from Turkey and Armenia and contributing to establishment of direct and accurate means of exchanging news sources; journalists from Turkey from mainstream media outlets covering human rights, culture and economy news visited Armenia for the ceremony of The Aurora Prize for Awakening Humanity, which took place between 26 and 29 May, 2017. The Aurora Prize for Awakening Humanity is granted annually to an individual whose actions have had an exceptional impact on preserving human life and advancing humanitarian causes.  On this occasion, the journalists participating in the programme visited media outlets, civil society organisations, met with their colleagues and took part in the events which were organised as part of the Aurora Prize ceremony.

Journalists from Artı Gerçek, BBC Turkey, Daily Sabah, Dünya Daily, Hürriyet Daily, T24 and Tele 1 TV paid their first visit to Armenia and thanks to their meetings with the researchers from Armenian Institute of International and Security Affairs (AIISA) have discussed the academic research on the impacts of the closed border. After the discussion, a round-table meeting was held at the Eurasia Partnership Foundation, during which civil society organisations representatives from Armenia presented their activities to the group and exchanged ideas on democratization and human rights developments in both countries and freedom of media and press.

Thanks to their meetings with various media outlets such as Armenian Public TV H1 and Kentron TV, they got to know their colleagues in Armenia and exchanged their opinions about media landscape in both countries. Moreover, the journalists also had the chance to meet a group of former participants of the programme at a round-table meeting supported by the Media Initiatives Center and discussed the freedom of press and media in both countries and the working conditions of journalists in both countries.

The journalists met the International Secretary of Armenian Revolutionary Federation Dashnaktsutyun Giro Manoyan as well as Edmon Marukyan and Mane Tandilyan from Way Out Coalition. During both meetings, the group was informed about the history and the present policies of the parties and discussed the future prospects of Turkey-Armenia relations.

In the third day of the programme, the journalists had a day trip to Dilijan, to take part in the panels organised at UWC Dilijan College as part of the Aurora Prize Ceremony events and had the chance to meet the award candidates. During the lunch at Dilijan, the journalists had the chance to meet Elif Yağmur Turan, a travel grantee of Turkey-Armenia Travel Grant and also one of the Turkish students studying at the UWC Dilijan. Elif has shared her motivation for starting the college in Armenia and her experiences as a high school student in the neighbouring country.

During the programme, the group also came together in a dinner with fellows of Turkey-Armenia Fellowship Scheme and learned about the experience of fellows about living in the neighbouring country.

As part of the 4-day visit, the group also made excursions to Cafesjian Center for the Arts, Parajanov Museum and Vernissage.

Turkey-Armenia Dialogue Programme series are implemented by the Hrant Dink Foundation
in partnership with Gyumri Youth Initiative Centre
with the support of UK Government’s Conflict, Security and Stability Fund.

Website links of the newstories and articles published by the journalists participating in the Turkey-Armenia Journalists’ Dialogue Programme, May 2017, Armenia