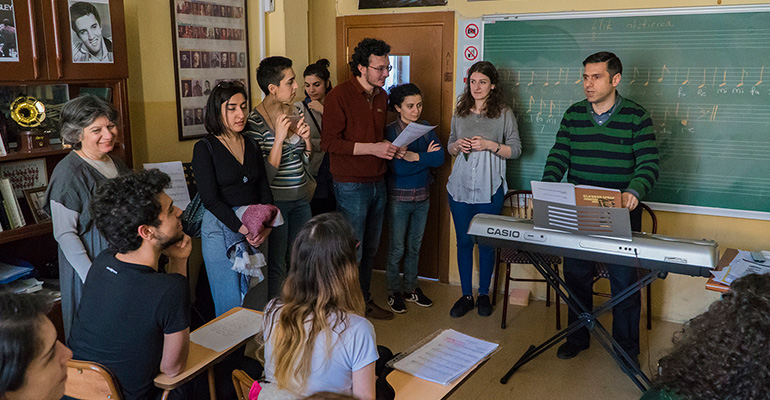 Following my arrival at Istanbul, I started my academic and extracurricular activities as a fellow of Hrant Dink Foundation in my host organization. I also got involved in a youth organization called “Istanbul&I” which consists of multicultural, multilingual group members. They are mostly concentrated on youth education and integration of asylum seekers in Istanbul. For supporting refugee shelters, the organization arranges cultural or public debates and events for collecting donations. The representatives of “Istanbul&I” suggested the idea of having an Armenian cultural evening which was later on scheduled for March 16, 2018. The main idea was to introduce and make people more aware of the Armenian heritage and culture. Our audience of more than 70 people was made up of different nationalities from locals, Americans, Europeans and MENA countries’ nationals. In the beginning of the event, the audience was asked of what they know about Armenia or what they have ever heard about it. Considering the country’s small size and the recent existence of an independent state, Armenia is not really well-known and unsurprisingly local people were the majority to have information about it. Our preliminary objective upon organizing the event was to represent Armenian culture to as many people as possible while averting any political overtone or statement.

The slogan of the event was “Armenia: Land of Noah” which took into account the Mount Ararat and Noah’s ark and their connection to Christianity and Armenian history. We started with a short presentation that brought important facts about culture and history. In order to give the event a casual entertaining atmosphere, we decided to translate some Armenian commonly used terms into English and ask our guests to try to explain the meanings of them. Such as «Ցավդ տանեմ- I take your pain» or «Ջիգյարդ ուտեմ- I eat your liver». Amusingly, all of these phrases don’t make any sense in English and for our guests they were funny and defiantly awkward. Following the event, people who attended wrote to us on social media and asked us about the meanings, ways of usage and origins of certain terms. Then, we presented traditional dances such as Tsaghkadzor and of course Kochari. The guests were challenged to try and dance with us and they actually were doing a great job. It was so overwhelming to see all these people from different countries and backgrounds dancing to the beat of Armenian traditional songs in peace and harmony. In addition, we decided to introduce the idea of «Tree of life» (Կենաց ծառ), according to the Bible the tree symbolizes human life from the birth to fertility and its supreme aim is reaching immortality. We prepared red, blue, orange tapes similar to Armenian flag and asked the guests to make wishes and tie the ribbons on the symbolic Tree of Life promising them that we are going to take the tapes back to Armenia and tie them to real trees. People showed great excitement and interest in this tradition.

Last but not least it was time to introduce the Armenian cuisine. With the help of our other fellows we cooked Dolma, Spas, Gata and other meals. The feedback on food was very positive and delightful. People asked for meals’ recipes afterwards, but of course we haven’t revealed all the secrets as a measured strategy to keep them more intrigued and interested in visiting Armenia. This wonderful opportunity made me understand that it’s very important to represent your own culture and traditions wherever you happen to be. The prevalent victory is that we met new people, made friendships and made people aware and interested in Armenia. Some of them even expressed willingness to visit Armenia in the near future. In the end that’s all about acting beyond borders, spreading love and understanding.