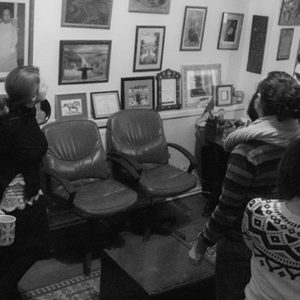 Turkey-Armenia Fellowship Scheme was established by the Hrant Dink Foundation in 2014 with a view to encourage cross-border affiliation and cooperation of professionals from the two neighbouring countries, within the framework of the programme Support to the Armenia-Turkey Normalisation Process financed by the European Union. The scheme particularly aims to enable cross-border learning opportunities in areas where exchange of expertise and lasting cooperation is much needed, such as academia, civil society, media, culture and arts, law and translation.

Fellows from Armenia, who continue their work in Istanbul at the moment within the framework of Turkey-Armenia Fellowship Scheme, visited the old Agos office at Sebat Building and exchanged ideas on the ongoing Site of Memory project. Arpenik Atabekyan, who continues her work as fellow from Armenia at Beyond Istanbul, wrote up her feelings about the old Agos office and her thoughts on the ongoing Site of Memory projects.

I have been at the Agos office in Istanbul in 2009 for the first time. The corridors and rooms were fully packed with newspapers, books; people were busy working with their everyday pace. Later on, we met Hrant Dink’s daughter at the beautiful terrace and exchanged some thoughts and words.

The Agos office, as well as the Sebat apartment where it is situated, is a unique site of conscience for people of Turkey and many other countries, as on 19th January, 2007 thousands came together in front of it to demand justice. That day and the following years became a ‘coming out’ for many hidden minorities in Turkey and it also led to identity crisis among some.

Together with Nayat Karaköse, the coordinator of the Site of Memory project, we stepped into Hrant Dink’s office, and looked at the paintings, personal photos and books that he owned. During the preliminary stage, the Hrant Dink Foundation has been conducting an inclusive process and they value listening the expectations and recommendations of a range of groups from different professions and disciplines. As the rest of the rooms for the time being are mostly empty, we were invited to give our suggestions about how to design and what for to use those rooms. Most of us had been to different sites of conscience and memory in different countries in Europe, Asia and Africa. Different elements from these memory sites have been discussed during the meeting and the brainstorming brought up many interesting ideas and inspirations.All in all, we all have come to a conclusion that what we would like to see in the former Agos office, is, in the first place, the memory and the history of the place.

After an interesting and fruitful discussion with Nayat and exchange of thoughts and experiences about memory sites, we all have agreed that what we (and future visitors) would like to see is not a place of grief and sorrow, but a place, where people can learn the history of the place since its foundation, a place of transformation, a place that gives hope for the future and hope for changes.

I think it is an amazing and at the same time important initiative not to let the place be forgotten, faded and lost throughout years, but transform it into a living, vivid, independently existing space as such. The Agos office can turn into a memory site, but at the same time, in parallel with the Hrant Dink Foundation’s new venue, it can be a place of small workshops, screenings, public talks and presentations.

Nowadays the beautiful Sebat building is covered with a green “veil” because of a construction work, but we hope that in the very near future it will be removed and we will enter Hrant Dink memory site with the hope for the future and remembrance.