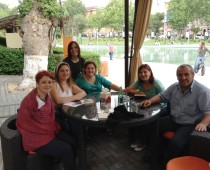 Ayşe Devrim Başterzi and Aslıhan Doğan Topçu from Mersin were supported by the Turkey-Armenia Travel Grant and visited Yerevan to find partners, films and directors for a book project on films.

“Yerevan is very green, very clean; full of sculptures and monuments. The inhabitants of the city are Anatolian people that I see everyday, dark-skinned people with beautiful eyes. When I ask those young people ‘Where are you from?’, they tell me ‘My family is from Urfa, my family is from Muş’, as if they never belonged there. I felt much closer and more acquainted with it than any other country, any other city I ever visited because of the Anatolian people with beautiful eyes and warm manners. I also felt more distant, more guilty every time I saw the surrow, the pain, the longing in their eyes; every time I noticed them wince when they heard Turkish words, because of the cruelties inflicted on the people by the governments.”

“I will not and cannot forget the restaurant in Yerevan that we went to and that had live music. Throughout the night, one after another, laments carrying the names of Anatolian towns were played. In which country do you go out to cry together, to listen to laments instead of having fun? Even if I don’t understand the words, I feel the pain seeping through them… and at the end of the night, they played ‘Kıskanırım Seni Ben’ for us, for their Turkish guests.”

“And Vartkes, who accompanied us for two days, said: ‘There you live on the land we left behind, how can we be not jealous of you?’ I felt an overwhelming shame, an overwhelming guilt before the longing of these people who were torn apart from their lands, their roots, their ancestral home of thousand years, from the graves of their ancestors…”

“I strongly believe that in order to make the people of the two countries acquainted with each other, to understand one another and to build empathy; direct contacts between these two peoples – facilitated through NGOs – has to increase in number and in intensity. I think these two peoples need to build closer relationships through civic encounters and through perceptions freed from prejudices and stereotypes.”